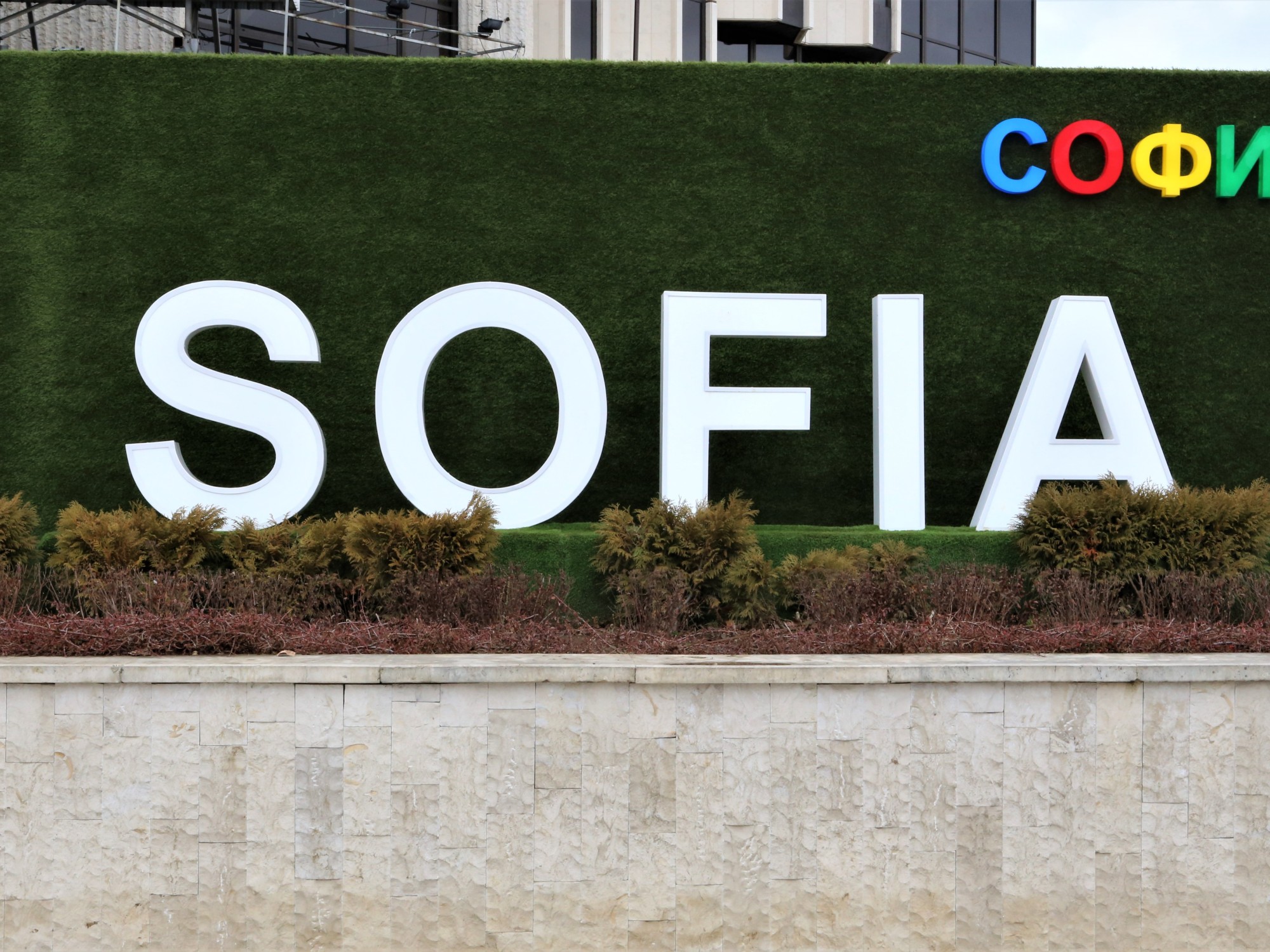 Sofia is the one of the under-rated capital city in the eastern Europe. The city’s landmarks reflect more than 2,000 years of history, including Greek, Roman, Ottoman and Soviet occupation
It is walk able to the major tourist destinations in the city center. We took a metro Red line to Sofia university and walked towards Sardika metro station. We started from Eagle’s Bridge. All major attractions are on the same route. It took us about 4 hours to visit all attraction in the route. Time is subjective here.

We felt the cityscape is beautiful at night. We felt safe. We did not see any drunk people, shouting on the street like many other cities. There are good nightclubs and bar opened at night.

Here are the list of places visited during our stay in Sofia.

This is the main pedestrian shopping zone in Sofia and extends for quite a distance. Plenty of shops, cafes and restaurants along here and busy even late in the evening.

Cathedral Saint Alexandar Nevski is a Bulgarian Orthodox cathedral in Sofia, built in Neo-Byzantine style. Iit is one of the largest Christian church buildings, as well as one of Sofia’s symbols and primary tourist attractions.

The camera is not permitted inside for free. 10 Lev is mandatory charge to take the camera in.

The National Museum of History was established on May 5, 1973. It is a national treasure house of the Republic of Bulgaria, a reliquary store on a world scale and one of the largest historical museums on the Balkan Peninsula. It houses over 650,000 cultural monuments and a huge archeological and historical archive.

Monument to the Unknown Soldier

Monument to the Unknown Soldier is in the centre of Sofia, located just next to the 6th-century Church of St Sophia, on 2 Paris Street. The monument commemorates the hundreds of thousands of Bulgarian soldiers who died in wars defending their homeland. Ceremonies involving the President of Bulgaria and foreign state leaders are often performed here.

Walking on the Knyaz Aleksander street between Serdika and Sofia University, the beautiful golden domes of the most beautiful church in Sofia.

The Monument to the Soviet Army is a monument located in Sofia. There is a large park around the statue and the surrounding areas. It is a popular place where many young people gather. The monument is located on Tsar Osvoboditel Boulevard, near Orlov Most and the Sofia University. It portrays a soldier from the Soviet Army as a freedom fighter, surrounded by a Bulgarian woman, holding her baby, and a Bulgarian man. There are other, secondary sculptural composition parts of the memorial complex around the main monument, like the group of soldiers which were used as a canvas by political artists.

In the vicinity of the square are the Presidency and the Bulgarian National Bank. The fountain, Atanas Burov, is named after the prominent banker and politician in Bulgaria

Concert hall by the Burov square and Presidential building

The Rotunda Church of St George

The Church of St George is an Early Christian red brick rotunda that is considered the oldest building in Sofia. It is situated behind the Sheraton Hotel, amid remains of the ancient town of Serdica.

Built by the Romans in the 4th century, it is a cylindrical domed structure built on a square base. It is believed that it was built on the site of a pagan temple, though the original purpose of the building was for public use. The building is famous for the 12th-, 13th- and 14th-century frescoes inside the central dome

During the construction of the Serdika II metro station the prehistories ruins were emerged.

According to Archaeology Travel author Thomas Dowson, “Instead of billboards on the platform, passengers arriving at Sofia’s Serdika II Metro station get to see stylish glass cases displaying just a handful of the city’s prehistoric and ancient artifacts. Complete Neolithic pots and well preserved capitals of Classical columns are amongst a few objects used to tell stories of Sofia’s past. Taking the escalators to street level commuters and visitors then get to walk through the restored streets of Roman Sofia, or Serdica; from which the metro station takes its name.”

Eagles’ Bridge is a bridge over the Perlovska River in downtown Sofia. The bridge and junction where it is located, sometimes referred to as Ploshtad Orlov Most (Orlov Most Square) are usually referred simply as Eagles’ Bridge (Orlov most).

The name of the bridge itself comes from the four statues of eagles on it, which are, symbolically, its protectors and patrons.

Transport
Cheapest way to travel in Sofia is to buy the day pass which cost 4 lv. The pass can be bought at the station, kiosk or local newspaper agent. It can be used on Trams, Bus, Trolley Bus, Metro. We bought the pass in the local newsagent next to our hotel. Due to unknown reason, to board the Metro the ticket had to be scanned by the person in the counter each time we enter. Late at night, after the dinner at James Boucher Station, there was no one at the counter to scan. We were nearly stuck, talking to locals advised the idea to enter from the special need gate, we were rescued. We used the day pass to get to the Sofia Airport.
Taxi in the rush hour the extremely bad choice. It took 1.5 hrs to commute 6 kms. We could have easily walked that distance. The driver did not speak english at all. We could sense driver was also frustrated due to traffic, likewise. The Yellow cab is common in Sofia.
Metro stations are really impressive, well maintained and clean. The metro operation started only in 2016, it is brand spanking new in the transport standard comparing to other cities.

Eating out
Outside the city centre the restaurant are tucked in residential areas. The restaurant in the area are not along the same street. They are dispersed. There are nice restaurants which are hardly visible from the distance, we have to had a closer looks. The preparation is the key to find the dinner place. Few places we have been to were fully booked, may be it was due to Valentine’s day. Advance booking is recommended, if there is specific place in mind. We found there are many coffee shops to pop in for the coffee and cakes.
Subway seems to be the good place for quick eats. Pizza is the popular one.
Cafes closes early, restaurant opens till late.

Language difficulty
I strongly believe, planning is the key here. Not many people spoke english who work in public services i.e. transport offices, shops, bus/taxi drivers etc. Most of the young people we met had a good command of english but the experience generations were not able to communicate.
The Metro use both Bulgarian and English so it was easy but the tram, buses they all are in Bulgarian. Majority of the signs, information are written in Bulgarian .
We have not had any language problem when we went to the restaurants, cafe, shopping malls.

Weather
We travelled in mid-Feb (Valentines day!). First day was light snow and the sleet. It was pretty cold. There were not many fellow tourist in most of the attractions. The temperature was around 3 degrees Centigrade. Wrapping up well is important including hats, glove, scarf.
The next was sunny with the clear blue sky. The average temperature was 6 degrees. When it was not breezy, sun was warm but the cold was crisp. We enjoyed the Winter sunshine and warmth during Lunch.

Though the Bulgaria adapted Euro when joined Euro zone, all the domestic transactions takes place in Lev. Make sure to have adequate currency when you are there. Majority of the restaurants we went accepted credit card, but carrying cash is recommended at all times.

This site uses Akismet to reduce spam. Learn how your comment data is processed.